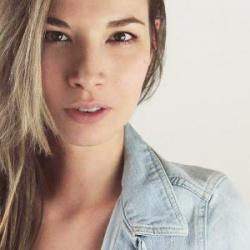 We Speak the Same Language: Design

Bridge Budapest started from and was established in Hungary as a cooperation between enterprises that have achieved global success by now with the view to enable the founding companies, i.e. Prezi, Ustream, Logmein and NNG to transfer their own history as an inspiration to domestic young people in order to motivate them to realize their own ideas and to dare launching an own enterprise. This year it was Nóra Pekker who won the Bridge Budapest design fellowship. She will visit NNG North America’s headquarters in the United States for a month and she will tell her adventures and experiences gained in America here, in the pages of Stilblog.

Nóra Pekker is a student in the final year of the Media Design Department of Moholy-Nagy University of Art and Design and is simultaneously a UX designer for a Belgian software development company. She has become acquainted with interface design during the MOME IxD course, which inspired her to set off for this line. In addition to school and work, she is working on her own application that would facilitate the course of psychological treatments for both patients and doctors.

NNG is a domestic-based software development company, which is unavoidable in the automotive navigation market. Their product, iGO Navigation can be found in the various brands of 7 of the 10 largest car manufacturers of the world as part of the navigation system installed in cars. The company started its activity in 2004 as a garage company employing 4 persons and by the end of 2015, the number of its employees is expected to reach 900. Currently it has 12 offices in the five continents of the world. In the course of her visit in America, Nóra will have an insight into the UX/UI design processes of the automotive navigation world under the mentorship of John Finnegan and Randy Tyner.

What does NNG work in addition to its self-developed products? How does the design process take place in an American company? And last but not least, where can the best donuts be found in the city?

It’s Monday morning. Today will be my first working day in America! I’ll have a breakfast in the hotel, of course, much and sweet, as everybody does here. I am musing on my waffle with whipped cream and thinking about what will happen today? How designers work in America? How is a working day going? What programs do they use? This and many similar questions rattle in my mind but I have to leave. Well, now it’s time for adventure, get in the Mustang, navigation on, let’s start the day! I’ve arrived, I was quickly shown around the office and told what project they were dealing with at the very time and what my task would be. Perhaps it was the largest question mark for me: what will I work at here and what do they work at in most of the year? If I mention NNG, everybody thinks of their iGO Navigation. If I want to be honest, it is more or less the same what I knew about the company. However, it is a well operating finished product. How can it be polished further? Or what else NNG designers can work at beside this?

I’ve received a reply to these questions at once. It turned out that in the American headquarters designers work at many other projects in addition to self-developed products, which I would not even think of. Several large international automotive brands have various projects on their drawing boards. And think not just of navigation! The first project I worked at was, e.g. an entertainment system for those who travel on the backseat. The interface was a screen installed in the backsides of front seats that can be used by those who travel at the back. But they also produce instrument board designs and, in fact, interfaces for any kind of cars. So that is what NNG designers work at!

The other thing I considered much how does designing itself take place here? What kind of programs do they use, what is the atmosphere like, how do they distribute the tasks, etc. I felt a little bit frightened if after all they expected me to do what I cannot do. So when I started working at the mentioned project’s wireframe my first question was how do they usually do this and which software should I use for it. A great load was taken off my mind when the answer was I could use the software, which is the most convenient for me to work with. A discursion started between my colleagues and me who does what how and why. I suddenly felt like being at home. A designer is a designer even if he or she is at the other end of the world. We use the same programs, we have the same problems with them, we find the same things aesthetic and we laugh at the same things. We speak one language: design. From that time on I did not feel myself as an outsider.

On the very same day I obtained a very valuable information on where one can eat the best donuts in the area. As an ignorant European, I was affected at the first Dunkin Donuts and had the feeling that is all, it maybe the heaven of donuts. I was wrong. As it turned out, a normal American citizen buys his or her daily donut dosage at a place called Krispy Cream and not any time! The huge neon advertisement in the shop’s window indicates when fresh donuts are finished so they can be bought while warm. Other information to know: eating donuts is recommended every day as frequently as possible and, naturally, even if you are not hungry.