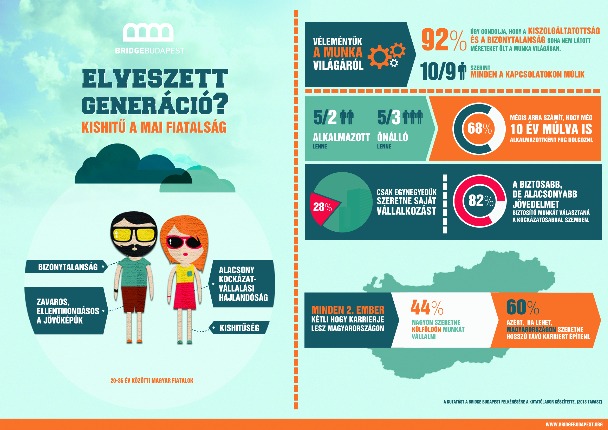 Today’s Hungarian youth are characterised by uncertainty, defeatism and little inclination for risk-taking. Their view of the future is confusing and contradictory – as discovered by the representative survey of Hungarian youth between the ages of 20 and 35, commissioned by Bridge Budapest. If they could, the majority of this demographic would build their career at home in Hungary, but they view their possibilities dimly. They feel that in Hungary, everything is determined by who you know.

92% of youths feel that within the current socio-economic milieu: the vulnerability and uncertainty reach never before seen proportions in the working world. As commissioned by Bridge Budapest, the results of the survey of a representative sample carried out by Kutatólabor (Research Laboratory) show: Hungarian youth between the ages of 20-35 view their future as quite confusing and uncertain. While the majority of them would like to build their career in Hungary and attain a level of autonomy, they just their environment and possibilities quite negatively, and in order to find better possibilities, the greater part of them would like to go abroad indefinitely.

What is apparent from the survey: Hungarian youth would like to realise their dreams, but they simply do not see how that would be possible at home in Hungary.They are afraid to take risks. Fifty percent of them doubt that they will have a career in Hungary.

While the youths are attracted to freedom, and thus also autonomy, despite the fact that 3 out of 5 would choose autonomy over being an employee, the large majority (68%) still forecast that even in 10 years, they will be working as an employee. This coincides with the fact that barely 25% of them plan to launch their own enterprise. This generation does not demonstrate much courage either: all in all, barely one-fifth of them (18%) would risk uncertainty for the possibility of a higher income, while four-fifths of them (82%) would rather choose security in return for a job that offers a lower income.

Nearly half of all youths (45%) would leave Hungary permanently, if they had the possibility. Far and away, in this the most important incentive is the money, but a different society and different culture, for instance, are also significant aspects. Nevertheless, 60% would build their long-term careers in Hungary, if they could.

The majority of them (92%) believe that Hungary’s population is living from day to day. At the same time, they judge their own situation in a more positive light: half of all youths count on having a career in their own field within the next 10-15 years in Hungary. For this, first and foremost the right connections are necessary. In the opinion of 9 out of 10 youths, everything depends upon connections, and about the same number believe that everyone is responsible for their own happiness.

Research material can be found here (only in Hungarian): Lost Generation?