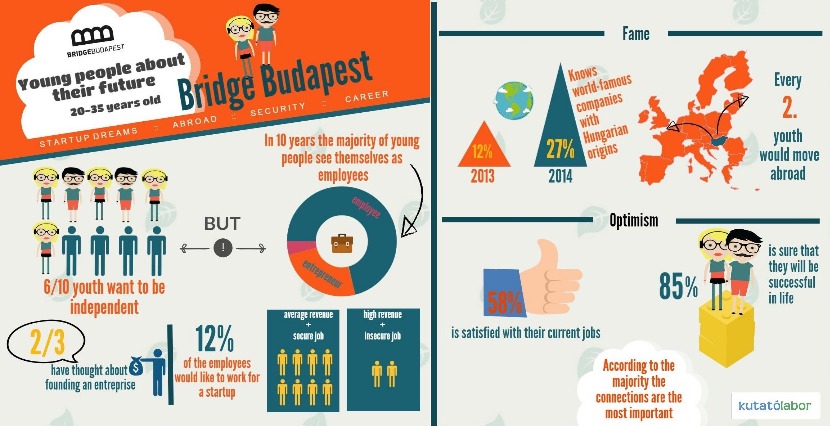 85 percent of young Hungarians are sure that they will be successful in life. This is one of the results from a representative survey among 20 to 35 years old commissioned by Bridge Budapest. Although most young people think that entrepreneurs are key to development, the majority see themselves as employees in the future. Half of them thought about starting a business but the majority chooses security over their ambitions.

It is the third year that Bridge Budapest, a nonprofit organization founded by Hungarian companies Prezi, Ustream, NNG and LogMeIn maps the career ideas of 20-35 year olds. The survey, carried out by Kutatólabor still draws a contradictory picture: although independence is appealing in theory, young Hungarian’s vision of the future is characterized by risk-avoidance and the need for security.

Two-thirds (65%) of 20-35 year olds thought previously about the fact that they could make a living from their own business, and half of them (48%) regularly entertains the idea of starting one. Despite their dreams, most young people see themselves as employees in the next 10 years and only every fourth (25%) imagines herself with her own business. 81% of young Hungarians would choose a secure job with a decent living over a better but risky one. The general attitudes of an entrepreneurial worldview is thus typical of only a small chunk of the age group: students who would choose an unsure job with a bigger paycheck are in majority only in Budapest.

Young Hungarians’ career expectations improved compared to the data from 2013. 58% of them is satisfied with their current job and 65% of them counts on a secure job in Hungary this year. 85% are sure that they will be successful in life. Paradoxically, they think both that success requires good connections rather than knowledge and performance and that everybody is responsible for their own prosperity.

Hungarian startups are getting more and more well-known and appealing among young people. 12% of those choosing the life of an employee would prefer working at a startup, the same amount as those choosing small and medium-sized companies. The rest (73%) would prefer working at a large company. Though in 2013, only 12% knew world famous companies which started out from Hungary, this year, the number rose to 27%.

There were no changes regarding opinions about working abroad compared to last year: 48% of young people would be willing to, while 41% would want to work abroad in the next 5 to 10 years. Their main motivations remain the same: higher pay, experience and the possibility of learning a language.

Bridge Budapest is a nonprofit organization founded by Hungarian startups Prezi, Ustream, NNG and LogMeIn to motivate young people with their own example, showing them that with hard work and some luck they too can achieve global success from Hungary. This is the third year they offer talented young Hungarians fully financed fellowships to the headquarters of the founding companies in Budapest, San Fransisco and the Far East.

About the research
The survey was carried out over the phone using standard questionnaires with 800 participants from Hungary between the age of 20 and 35. Data collection was carried out by Kutatólabor on the spring of 2015. The composition of the participants of the survey regarding their sex, age and regional groups reliably represents the composition of the general populace. The research is carried out every year from 2013 to see how young Hungarian people’s vision of their future, success, opportunities and entrepreneurship change over time.

Research material can be found here (only in Hungarian): Satisfied employee generation?