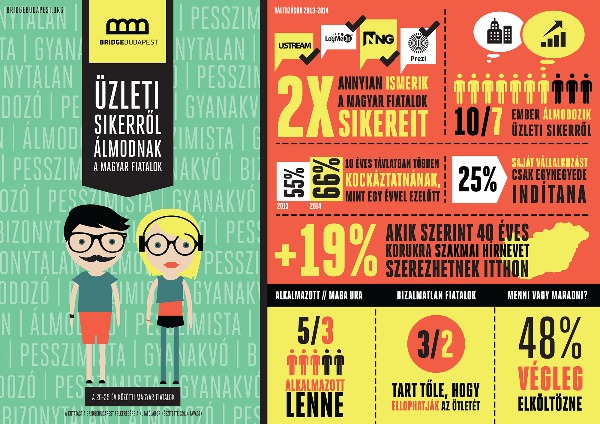 Although the majority of young Hungarians between 20-35 believe that there has never been such a high level of uncertainty and vulnerability, more than half of them still plan on having their career at home in Hungary – according to the representative survey of Bridge Budapest. In the long term, an increasing number would take risks and leave secure employment. At the same time, these Hungarian youths are pessimistic and suspicious: they believe that everything depends most of all on luck and the right connections, and they are afraid that their ideas will be stolen; thus, they would rather dream than take action.

The most successful global success story that was launched in Hungary, Bridge Budapest, operated by LogMeIn, NNG, Prezi and Ustream, for the second year running, has commissioned a survey of entrepreneurial inclination among 20-35-year-olds and their ideas about their careers. According to the survey carried out by Kutatólabor (Research Laboratory), as compared to the previous year, the inclination for risk-taking among these youths has increased somewhat. By now, one-fifth less than last year choose secure work as an employee, and in the long run, risk-taking is more attractive.

Although three out of five prefer autonomy to an existence as an employee, material uncertainty continues to strongly influence our decisions: just two out of ten would choose autonomy if it were paired with an uncertain income. Those who are older, as well as those who have completed a lower level of education still strive for security. Two-thirds of 20-35-year-olds imagine themselves as employees even a decade into the future, and they generally foresee six places of employment in their lifetime.

An increasing number consider study abroad or a working experience elsewhere important, and 40% of those surveyed would work abroad over the next 10 years. The younger generation, men, and those living in regions west of the Danube or in the southwest are the most mobile. Their decisions are motivated primarily by a higher income, but language study and gathering experience are also important. More than half of those between 20-35 still imagine that they will have a career in Hungary, but 48% of them would leave the country permanently if they had the possibility.

“Though the majority of youths feel there has never been such a high level of uncertainty and vulnerability, a fine shift can be felt. The inclination for risk-taking has grown a little bit, with more believing that it is also possible to run a career at home and to spread the global success stories that started in Hungary. In the survey, double the number of one year ago had heard of enterprises launched by Hungarian youths that attained global success. Nevertheless, instead of action, youths still rather dream.” – indicated Veronika Pistyur, head of Bridge Budapest. 7 out of 10 dream of business success; however, only one-quarter of those surveyed would start their own enterprise.

Research material can be found here (only in Hungarian): Young Hungarians dreaming of business success