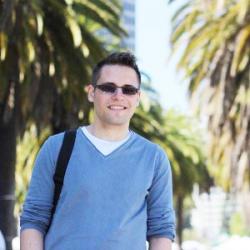 Down to the valley!

It’s a well-known fact that Silicon Valley is the home of several important IT companies, including Apple, Facebook, Google, Microsoft, just to mention the big ones. During my stay in San Francisco, I went on 2 road trips to explore the area a little bit.

I took the first trip together with the Bridge Budapest fellows staying in SF. One day we came up with it, the other day we simply rented a car, packed our stuff, and we were on to go. The atmosphere was pretty good in the car—we kept chatting, listening to music and just enjoying the road and the fact that we were together. Our first stop was the Facebook HQ in Menlo Park. Well, from outside, you cannot see much of the Facebook campus—it is rather a closed world, but at least, we could check in on Facebook and take a selfie in front of the big like symbol at the parking lot entrance. (By that time, I didn’t know I would have a chance to discover the Facebook HQ from the inside, but I leave this for another blog post.) After Facebook, we moved on to visit a place that might not be so exciting or well-known, but its historic significance is obvious—the HP garage, birthplace of the Silicon Valley, where a plaque commemorates the foundation of HP, that started in that garage, the very first successful IT giant in the area . After paying our tribute, we continued our journey to Google HQ in Mountain View, that is a huge, colorful, modern campus for creative geniuses—seriously I could feel the IQ there in the air… We even met the very own dinosaur of Google, Stan, and tried out the famous Google bikes that the employees use to get around the campus. Speaking of Google vehicles, later that day, we even saw a Google Self Driving car in the parking lot of an In-N-Out Burger nearby.

Before moving on, we took some funny pictures with the Android figurines. It must be so awesome to work at Google… though this also applies to NASA Ames Research Center, our next stop. NASA has quite a couple of research centers where they work hard on a bright distant future for mankind. It must be a great privilege to work there. The Ames Research Center in Mountain View has a free exhibition where they showcase some of the most important achievements and projects of NASA research in a way anyone can understand. They even have a space shuttle simulator, a replica of an ISS cabin and I nice gift shop where I just couldn’t help buying a NASA t-shirt…

Well, after we all saved the Earth multiple times on the space shuttle simulator, it was time to move on to our next stop, Cupertino, to visit one of the most influential companies of the Valley, Apple. It was just a big feeling to be there, the place where all those amazing products of the company that we all know very well were born. Finally, our last stop had nothing to do with any high tech company or research facility at all—it was Big Sur, one of the most beautiful sights alongside road 1—once you make it to there, you got a breathtaking view of the clean, beautiful ocean as its mighty, sparkling waves are colliding with the giant rocks along the shore.

This road trip was quite special to me. Not just because I had a chance to visit these awesome places—as an IT guy, you can imagine how satisfying this trip could be for me—but because we did it the last day before I turned 22. More precisely, I turned during the trip, thus back in Hungary, it’s 9 hours ahead, so I was receiving a bunch of greetings on Facebook while we were on the road. So that was kind of the most exciting birthday, and the best birthday present I’ve ever had.