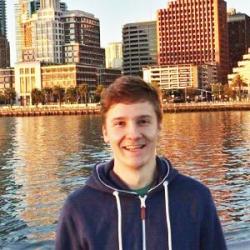 Putting aside motivations for a moment, coming to the Silicon Valley is not the worlds most easiest, but also nowhere near the hardest things one can do.

Let’s make the advice once and for all:

I will get back to this later, but if this is done, there are still some wicked visa papers to fill and a more or less uplifting flight to take.

They often joke about Los Angeles that even the waiters read movie scripts before serving two coffees. Welcome to San Francisco, the place where waiters serve two cappuccinos, then go back to read linux manuals.

Good weather, openness and the already mentioned sense of initiative. Sometimes taken to the extremes. For example it could easily happen that just as you get off the plane, people pick you on the metro to ask what do you do there and by the time you could answer the whole metro listens to, with surprisingly huge and positive dedication: “Hey people, these guys are from Hungary and they will be interns at Ustream!!”. Then as soon as they find out what the heck is Ustream, they start downloading it onto their phones, to give it a try.

These experiments and startups are a really common part of everyday life for people living here, starting from the city’s gentrification to the hundreds of cars with pink mustaches.

(A local (for now) mobile app based taxi service called Lyft. Where people with a car, an iPhone and the optional mustache could start driving around the city transporting one and other and make some money in the meantime.)

So here we are sitting on the metro and everybody is downloading Ustream. Right next to the other apps and services that could possibly start nowhere else. Just so that after many pivots, new attempts and corrections later, they could finally become something useful.

Next morning recovered and choosing to walk, a short introduction to the hills of the city. Then on monday if we make sure not to get hanged up in a sunny park or coffee shop, we find ourself in the office. In the same building with Adobe, Techcrunch and as a successor to Macromedia, Razorfish, Eventbrite or Yammer.