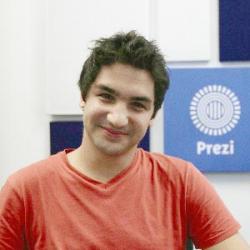 Luckily the fellowship sent 4 people (including me) to San Francisco, so when I arrived, the other fellows were already waiting for me couple of rooms away. Some local beer, a good company quickly made me forgot how long the trip was.

Before actually going to work, I had a full day to look around in the city. I guess everyone, who comes to SF visits the Golden Gate Bridge. So did I.

I have to say, this is something, which should be seen by everyone. Even though pictures won’t give back the full feeling, you can find some at the end of the post. And a quick note about the hills of Frisco. I saw pictures about it, I was expecting the steep streets, but it was way steeper then I imagined. Some things look like they were close to each other on the map, but it might mean a huge difference in the altitude. It can be surprising. 🙂

And the most exciting part came on Monday, when I went to the office. It is a nice 20 minutes walk from the hotel. As you get out from the elevator, you will find yourself in the huge office, with all the Prezilians. Finally, I could meet my mentor in person. Right after some quick introductions, we started the work. Pierre and Szilveszter (the two engineers of the website team) sketched and explained the architecture of the system. They told me who things work here, from a bird’s eye view. New technologies, abbreviations, systems and many-many data. I tried my best to understand and process everything, but it was not easy 🙂

After this, I received a relatively easy task: I had to fix a small issue in the signup process of Prezi. Though the task was not hard, I needed time to get familiar with the new systems. I managed to fix it, and right on my first day, we deployed my fix. It means, that if you load up prezi.com now and try to register (which you should if you haven’t done it yet 🙂 ), you will already use my fixed code. This was quite a good feeling, as I could contribute to something, which is used by a huge amount of people. After an intense, exhausting, but altogether a great day, I slept very well 🙂 The rest of the first week went similarly. I was getting to know other new systems, other new people, the city and everything you can find here. Even after a couple days it was clear, that everything in the Prezi office is really professional. I will write a next post about this 🙂

I had two great experiences, which I would like to share with you. The first, that I have been to my first true meetup. For the ones, who are not familiar with the term, let me explain in the nutshell. Meetups are events, where people, who are interested in the same things meet each other, talk about the thing, and someone make a presentation. There is literally no topic in IT, which doesn’t have a meetup group. So I visited one, and I have heard a super presentation about Django’s transaction handling. I already planned many other meetups :).

The other experience was over the weekend. The Bridge Budapest fellows together rented a car, and we drove to the Silicon Valley.

We visited the headquarters of all the important companies. We liked the Facebook HQ, we drove on the Infinite Loop (where the Apple HQ is) and we rode the colorful bikes of Google in Mountain View. Besides this we saw the garage, where Hewlet and Packard founded their company, which basically started the Valley and we also went to the NASA Ames Research Center to see a piece of Moon.

And the new week has already begun, so I am ready for new adventures. But the post here ends now, I promise, I will be back 🙂