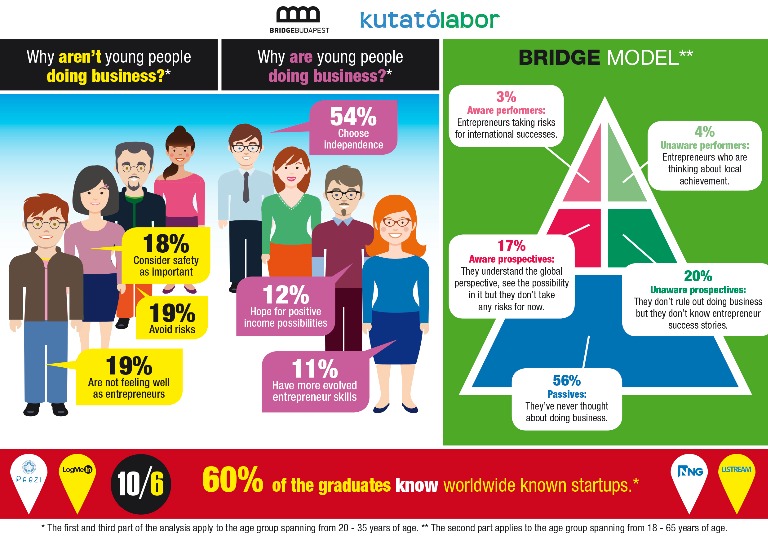 In terms of entrepreneurship, more than half of the Hungarians are passive and only 20 percent of them are conscious. There is however some reassurance in the fact that 3 percent of them are also actively engaged to achieve global success. Bridge Budapest has developed the Bridge Index, with which one can measure how typical entrepreneurial attitude and mindset are among Hungarians.

This is the first year when Bridge Budapest has prepared a representative survey, using a special methodology, not only of those between 20 and 35 years of age, but of the entire Hungarian adult population. The Bridge Index developed by the Research Laboratory measures the percentage of Hungarians who are able to act, are conscious and are ready to think on a global level when it comes to business. The model can determine the structure of the society in terms of entrepreneurial mindset.

It has found that 20 percent of Hungarians had already had the idea to start a business but they had rather decided to stay on the fix, average income for that time being. These people typically have a secondary qualification and belong to the age group spanning from 18 and 29 years of age. Entrepreneurial mindset is fairly typical for 17 percent of the respondents and they could easily choose the entrepreneurial path. Most of them are men, hold a degree of higher education and work as employees.  The survey has found that 4 percent of the Hungarians already have their own business, but not with the global mindset which startups are characterised by, and 3 percent manage their business with the greatest consciousness and engagement and want to penetrate international markets as well. The Bridge Index is made up by summing the last three items.

This new “measurement unit for entrepreneurialism” provides the possibility to follow up the attitude towards entrepreneurship of the different social groups in an academic manner every year. “Reinforcement of an entrepreneurial class based on knowledge and performance could contribute to a more competitive country. If we have a clearer view of who do business and which principles do they follow, we will also understand what can be utilised to motivate the evolution of a more conscious and more transparent entrepreneurial class” – said Mrs. Veronika Pistyur, head of Bridge Budapest.  This year’s measurements show that it is the men in their forties and living in larger cities who are the most courageous and best informed entrepreneurs, and they are the ones who most determine business life as well.  60 percent of those who have already made up their minds but still have not stepped on the entrepreneurial path are also men in their thirties and forties and hold a degree of higher education.

In the course of the survey, Bridge Budapest also conducted the traditional annual youth survey. Those between 20 and 35 years of age were asked about their visions for the future, their attitude towards success and their willingness to become entrepreneurs this year as well. The representative survey has revealed that 6 out of 10 young people still have plans for their own business or professional success. The trend concerning the belief in the possibility to be successful in Hungary has somewhat improved in comparison to the previous years: now, only a bit more than half of the respondents think that it is more difficult to succeed in Hungary, compared to the ratio of 65 percent which was measured two years ago.

Though starting a business is still not a typical thing among those between 20 and 35 years of age, the changes in the underlying reasons are encouraging:  Though last year 30 percent said that they would decide to be an employee due to reasons of financial safety and risk avoidance, this figure has shrunk almost to its half by today, to 18 percent. The rate of those who do not think that they business knowledge would be sufficient has however significantly increased: 19 percent of them think that they are still not sufficiently prepared to start their own business.

This consciousness is also reflected by the fact that those who would choose becoming an entrepreneur have already mentioned the improvement of their entrepreneurial skills as their reasons to do so in a greater number in addition to independence and higher income possibilities.

The visibility of companies started by Hungarian young people is increasing year by year. Their rate of about 10 percent in 2013 has nearly tripled since then, hence it has exceeded 30%. Almost 60 percent of those who hold a degree of higher education mentioned that they knew a company which had been founded by Hungarian young people a couple of years before, and that had become a worldwide known corporation employing many hundreds of people by today.

The rate of those who are planning to work abroad has been continuously between 40 and 45 percent during the last three years, and in 62 percent of the cases they have financial reasons as a motive. The number of those who would for sure not leave the country for good has however become the higher one by this year: their percentage has increased from 27 in the last year to 34 this year.

The non-profit association of Bridge Budapest was founded by the most successful Hungarian startups: Prezi, Ustream and Logmein in order to use their own examples to encourage young people to believe that hard work and some luck can bring global success in Hungary as well.

Research Methodology of Bridge Budapest: The survey was conducted by the means of telephone questioning and standard questionnaires, with a total number of 1,112 Hungarian residents aged between 18 and 65 having been asked. Data was collected by the Research Laboratory in January 2016. The composition in terms of gender, age groups and regions of the individuals covered by the survey reliably represents the composition of the Hungarian population in terms of similar characteristics. The survey has been repeated every year since 2013 in order to have a picture about how the vision of young people about their futures, their understanding of success, their possibilities and entrepreneurship change.